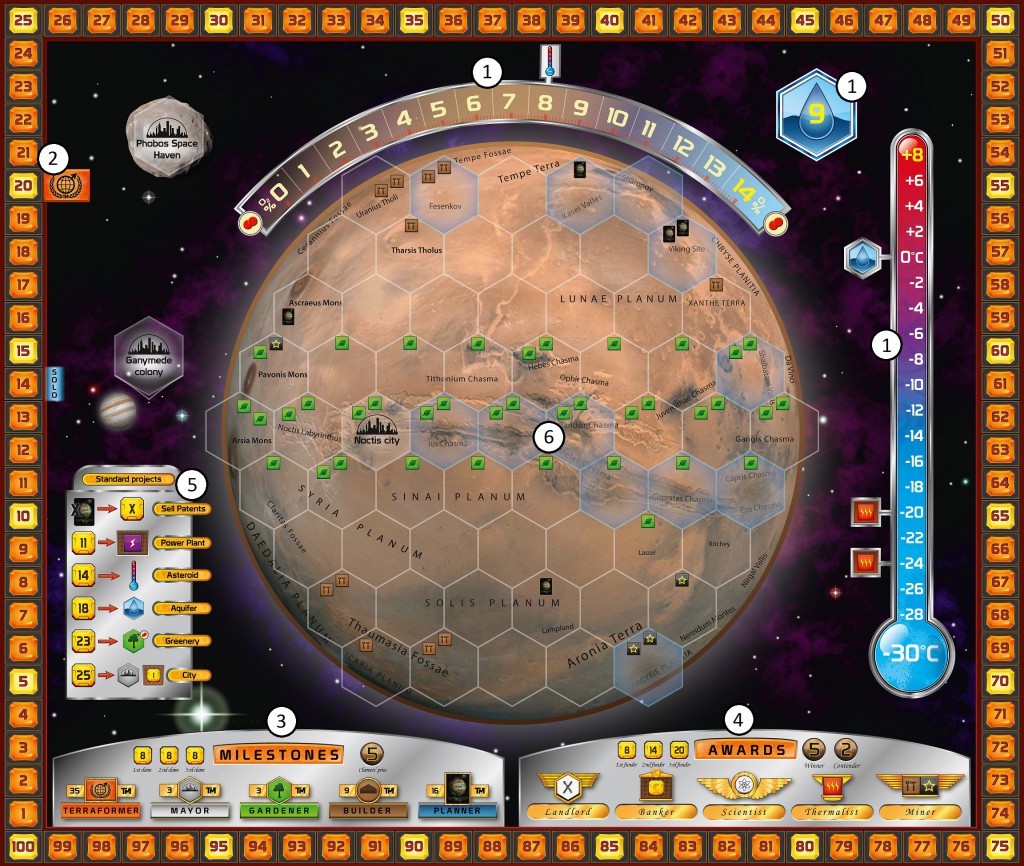 Let’s start with the global parameters (1): Temperature, oxygen and ocean. This is what terraforming is all about – raising these parameters to tolerable levels. When they are all maxed out, the game ends. Raising them also adds to your terraform rating (2), which starts at 20 and constitutes both income and victory points (although VPs come from other sources as well)! Note also the bonus steps at -24C, -20C, 0C, and 8% O2, which reward the player reaching those steps. The bonuses simulate natural processes like thawing out frozen carbon dioxide from the ground, melting the permafrost, and increasing the greenhouse effect.

There is also a race for the milestones (3) that give good, cheap VPs to the first 3 players claiming one, and awards (4) with different categories that players may fund and then compete for.

Besides the cards, there are always standard projects (5) available to the players, allowing you to pursue your strategy even if the cards fail you.

Finally, but perhaps most importantly, there is a map of Mars (6) where you may place tiles. Not only does this visualize the development of colonization and terraforming (the human footprint), it is also an arena for competition, bonuses and victory points. There are 4 types of tiles in Terraforming Mars: ocean tiles, greenery tiles, city tiles, and special tiles. When placing a tile, you may receive a placement bonus if there s one printed on that area.

The 9 ocean tiles also constitute a global parameter, and so an ocean tile gives you a terraform rating when you place it. Since water flows downhill, it will collect in the areas of lower elevation (marked in blue and reserved for ocean tiles). There are 12 areas and 9 tiles, making each game a little different. Placing tiles next to ocean tiles also gives you a nice little placement bonus of 2 megacredits per adjacent ocean tile..

Next are the greenery tiles that you generate by spending plant resources. This also increases oxygen because of photosynthesis, meaning that this too increases your terraform rating. A greenery tile must be placed next to another of your tiles if possible, and is worth 1 VP.

City tiles may not normally be placed next to other cities and are worth 1 VP for each adjacent greenery tile (regardless of who owns the greeneries). It feels great to stroll around in the forests of your competitors!

Last, there are unique special tiles defined by specific cards. The corresponding card lists any rules for placing that tile. Special tiles include things like mining areas and other areas closed off to the public.

In the next update, you will see an example of a special tile and its card.