As you may have noticed by now, our next release is a space game. To set the mood, Jacob has written a short story that will give you some hints as to what the game will feature. Enjoy! 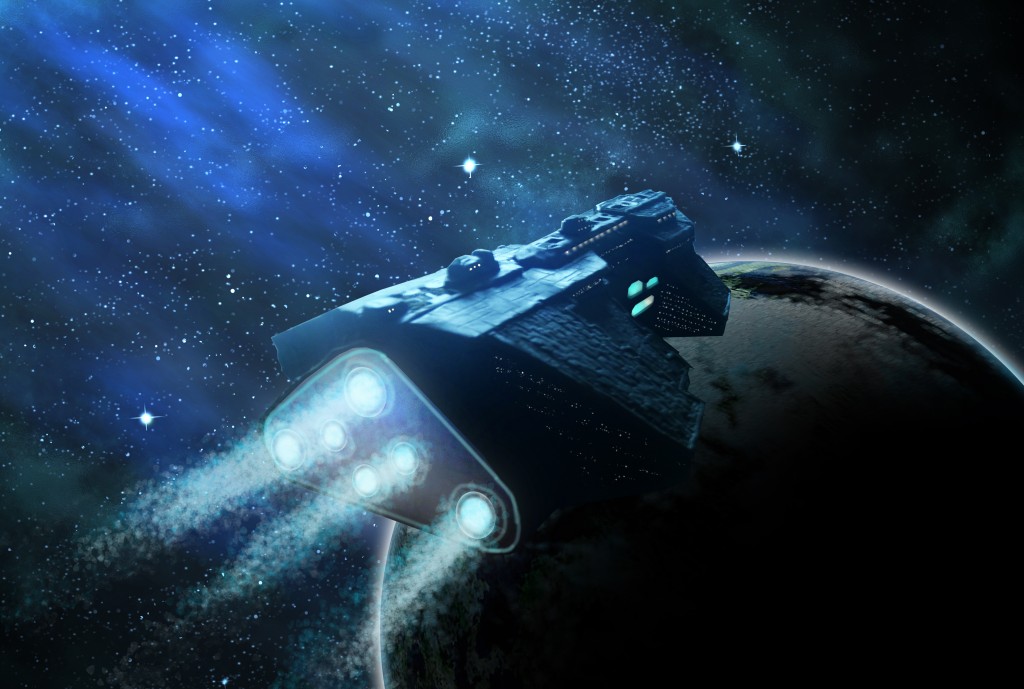 Admiral Gerald Hunter was inspecting the scene in front of him through the viewport.

– They can’t be serious, he stated as he gestured towards the vessels below in orbit around Eden.

– It seems that the Thor Gate Alliance got the intel as well, sir, his adjutant commented.

– No matter. They are no match for us. I can’t believe they would send such a weak fleet here. Ergonia of all! Even though the protector fleet has left the system, they should realize that they would not get the spoils to themselves. Perhaps this is all they could muster on such short notice. Again, no matter. Battle stations, Foss. Prepare to launch fighters.

– Yes, sir. Foss saluted and turned on his heel to relay the orders.

It would not be long before the Alliance detected Fleet Valiant, but Hunter had made good the time they were in planet shadow. He grinned to himself as one light after another blinked green on the console to his left. The Valiant lumbered on towards its prey when the com went live. Hunter switched it on and a Pleiad Council envoy appeared and immediately demanded that Fleet Valiant refrain from hostilities, in the name of the charter. Irritated, but unmoved, Hunter replied,

– Not this time, envoy. Eden is unoccupied – I have clearance. Negotiations are through here.

According to plans, his superiors and their council friends should have declared Eden unoccupied just a few days ago.

– But, what… the envoy began before Hunter closed the com. He was so tired of these meddlers that always seemed to get in the way. But not this time.

– Well said, sir, said his adjutant that just rejoined him on the bridge. They will be in range in just a few minutes, sir. What are your orders?

– Launch fighters and fire at will.

As his fleet prepared for battle and soared forward, Hunter watched the feeble Alliance fleet muster what defenses they had. More transports arrived from the planet surface and the signatures of pesky Thor Gate energy ships formed up with some other vessels in front of Ergonia. Those are new signatures, thought Hunter as his fleet opened fire. Missile streaks and laser beams began to fill the viewport, but immediately bright flashed emerged in their way. Shield ships! I should have known, thought Hunter. It must be a new design. No matter, though. No shields or energy is going to keep our firepower at bay for long.

– Send the fighters to destroy those shields. Hammer them to pieces, he ordered. And log that new ship signature.

Enemy fighters, hopelessly outnumbered, perished as they tried to protect the shield ships. His grin widened as one after another, the shield ships were destroyed. Then his grin dropped as a green aura began to build around Ergonia and her closest ships.

– No! Blast her! She is escaping! Hunter bellowed furiously. But it was too late. Ergonia was gone with all the spoils she could carry. How could she engage the drive so quickly? He never could figure the Thor Gate Alliance out. Always some new trickery. At least this time it had cost them a lot of ships, he thought sourly.

– Clean up and then tax that planet. And I don’t care that they’ve already been taxed! Send full reports to my quarters. I’m out.

– Yes, sir, said Foss as he watch admiral Hunter stride away in a furious mood. Best not to disturb him for a couple of days. As he watched the scene in front of the Valiant he thought, I’ll have things to do anyway.