The space industry is beginning to grow again after the Hy’Dran Wars! To encourage the development, interstellar foundations are awarding prizes to corporations that are outstanding in different areas. As the owner of one of these corporations, you compete to build the biggest, best, and most beautiful space station the worlds have ever seen…

StarScrappers: Orbital is an upgraded version of our previous game, Space Station. It has been rethemed to be set in the StarScrappers universe, which is a series of games published by Hexy Studio in Poland. The rules have been streamlined, the cards balanced, and the graphics have been remade from scratch by Hexy’s talented graphic designers.

In Orbital, each player takes turns building modules to their stations, playing event cards, and using their module abilities until their money runs out. Then the year ends, and players are awarded victory points for their achievements. Then they get more cards, more money, new crew members, and a new year starts. After 5 years, the player with the most victory points wins.

This game uses the FryxGames Card Size. If you want sleeves for the cards, we have them here too. 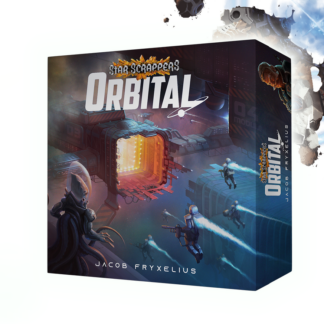 As we are awaiting imminent restock of Big Box Promo Packs, some orders are put on hold for a few days. Dismiss