A vital part of a global ecosystem is fish life, so of course we have a card for that. 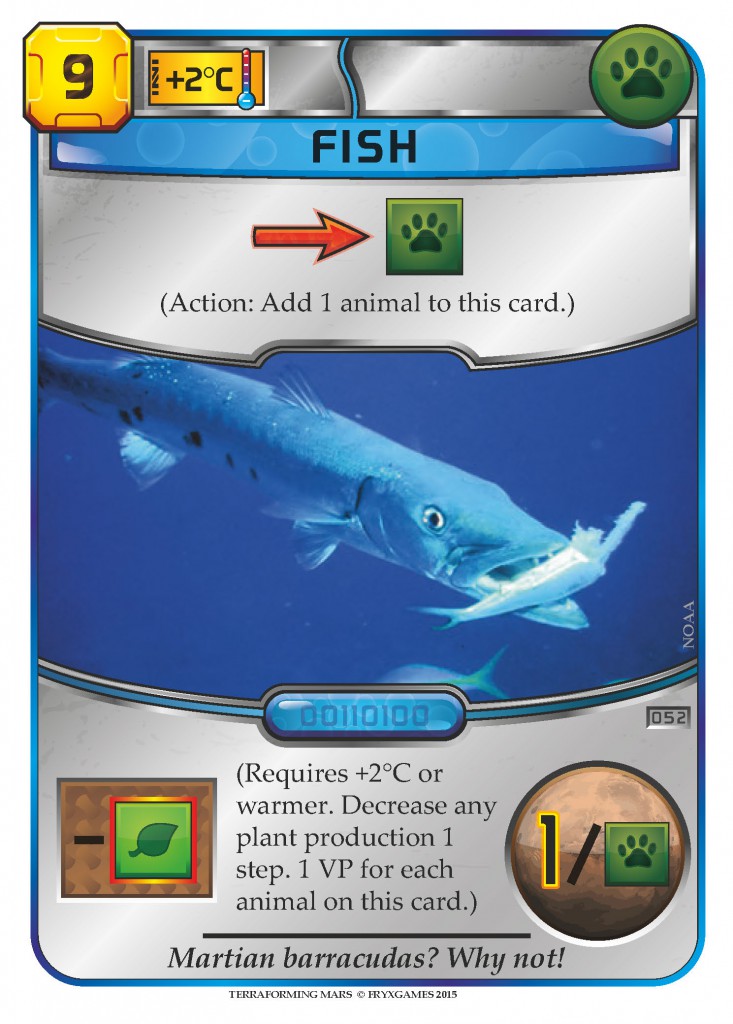 Introducing fish life is a good way to get victory points. And to eat the plants your opponents are trying to introduce. The victory points are awarded for building such a nice and useful ecosystem, and spreading and nurturing endangered species from Earth. So we used a picture from National Oceanic and Atmospheric Administration (NOAA).

Anyway, from the generation you play this card you’ll get 1 VP each generation, quickly adding up if allowed to work long enough. But will you be able to get much use from it? It has a requirement of +2°C, which is very high on the temperature scale (which goes from -30°C to +8°C). Possibly, you’ll only be able to use it once or twice before the game ends!

If you get this card in your starting research, is it worth the 3 megacredits to buy this card to your hand and hold on to it the whole game only to be able to play it for a few measly VPs at the end? Well, it might actually not be all that late in the game, because you can choose what parameter to affect when you terraform (temperature, oxygen and ocean). If you also draw cards that allow you to raise the temperature efficiently, and dedicate your strategy towards this goal, you may find your fishes flourishing a lot earlier in the game. Of course, the other players also terraform and may or may not help you with raising the temperature, but they don’t know that you’ve got fishy intentions!

Another way to profit from the fishes is to actually import large quantities from Earth (if you have such cards), adding multiple resources to the card in one go.

Some of you may have reacted to the requirement being +2°C. Quite right. All fish need water, so why is there not an ocean requirement? And all animal life needs oxygen, so why is there not an oxygen requirement? Actually, most other animal cards do have an oxygen requirement. But for there to be fish life, you need liquid water. And for that you need an average temperature over 0°C, at least at the equator (which is what is represented in Terraforming Mars). If you are above freezing only in the summer, then all water will refreeze when it gets colder again. No fish.

So there are actually three requirements for fish, but the temperature is the most important one. You can have fish even without oceans – all it takes is smaller lakes. And when you reach average temperatures above freezing, you’ll almost always have enough oxygen too for their humble needs.

So instead of having a really complicated multiple requirement, we made a very reasonable approximation (shortcut) and went with the temperature requirement.

From a gameplay point of view it is also nice to have an animal card supporting a temperature strategy where most other animals benefit from an oxygen strategy. Fish actually even fights the oxygen strategy by decreasing plant production (plants make oxygen through photosynthesis)!