We have previously shown you several cards with an Earth tag. There are many very wealthy people on Earth, longing for another adventure, another frontier. So, what are you waiting for? There is money to be made!

Send a small colonization unit to Uranus’ moon Miranda, where the Solar system’s highest vertical drop is located: at Verona Rupes, where Miranda’s two halves were not quite lined up when they joined. Construct a spaceport on the edge, a resort on a ledge, and use your contacts on Earth to spread the word: base jumping at its best, falling for hours in the low gravity. Not to mention the climbing! 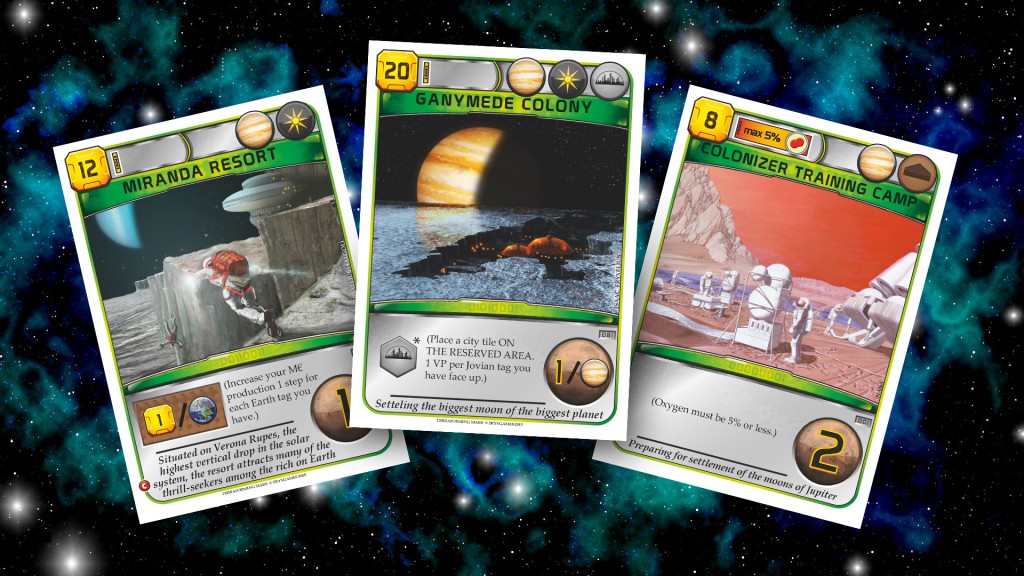 Being a medium-sized enterprise, the Miranda Resort is not very costly, and it also gives you a VP for establishing human prescense so far out in the Solar system. The payoff depends highly on your connections on Earth, and can turn out to be a very lucrative affair in the right circumstances. Being a space project (space tag), titanium can be used for making the resort, and maybe you have discounts or other things up your sleeve, too. For example, if you have established a colony on Ganymede, every project in the outer solar system (Jovian tag) is worth an extra VP, because of the availability of transports, equipment, goods, and workforce.

The Ganymede Colony also places a city tile, which can trigger all sorts of interesting effects depending on which cards are in play…

It doesn’t sound like this ties in much with Mars, does it? No, not very much – unless you use Mars’ thin atmosphere and harsh conditions as a training environment for the colonists you plan to send to Miranda or Ganymede. This springboard for colonization will give you a lot of credit (not megacredits, but VPs). Combine it with the Ganymede Colony to get even more! It is quite safe, with Martian colonies nearby in case something goes wrong. Also, it’s an opportunity to put your local resources to use (steel may be used to help pay for cards with a building tag).

Just one caution though: you had better do it before Mars gets too much of an atmosphere, or otherwise altered environment, because after that, you will not be able to simulate space colonization.