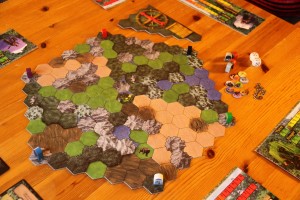 In the normal game you place the landscape tiles in a row and discover them as you move along. In this scenario you place 6 random tiles in a circle with the village (supply area) in the middle. (See picture!) The players (2-8) is spread out around the rim of the board and want to get to the center to receives bonuses. This is a last man standing where it’s all about surviving and hurting the other players. Brutal, but fun!
Special rules for this scenario:
– Each time you move into the supply area, draw 2 event cards and 1 random player token (use all 8 tokens). If you draw your own token, draw 1 extra event card. If you draw an opponent’s token, they walk into a trap: roll a die and get as much exhaustion. If you draw a token of a player not used in the game (or a dead player) place the token anywhere on the game board. It will move and attack the same way as the wild animals, but will be inactive this very first Nature’s turn. If the player token is defeated, it is immediately removed from the game. Unlike defeating an animal, you don’t get any hunger back when killing a player token.
– Each time you have been inside the supply area, you must move to the edge of the board before you go to the supply again.
– Fight: If a player enters the same area as another player, a fight occurs, and both players roll 2 dice against each other, just as in the “Fight event card”. During fights, all event cards regarding animal attacks may be played. Opposing players or tokens count as animals.
Good Luck! 🙂
Latest News
News
Newsletter