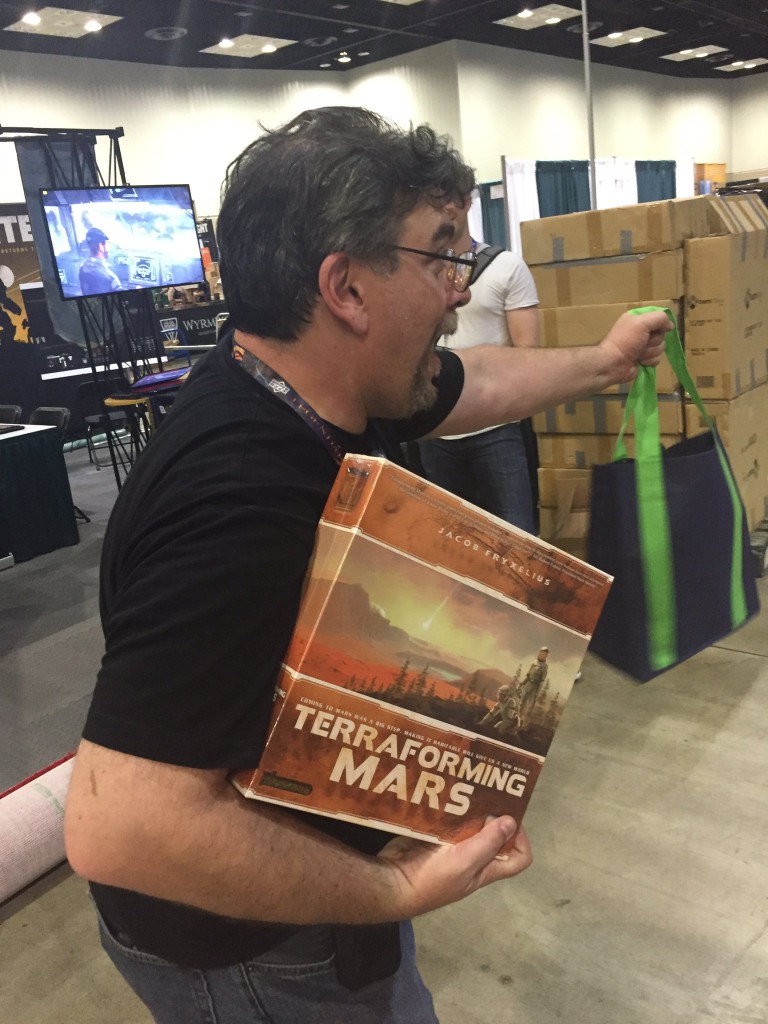 GenCon, the largest board game fair in North America, is over. It started August 4th and ran for 4 days. Tens upon tens of thousands of attendees gathered for what is known as “the best four days in gaming”. For us, this has been exciting because Terraforming Mars debuted there, with our American publisher Stronghold Games. The official release of the game is September 28th, but Stronghold assembled 300 copies for this GenCon pre-release. The short version: they sold out in three hours!

“This is an outstanding game!”…”TM excels at giving players a sense of purpose and satisfaction – it’s extraordinarily thematic. Indeed, this may just be the most thematic game I’ve ever played.”…”Best Game of the Year so far!” – Steve Carey (rated 9.5/10)

“Awesome game, best board game of Gen Con for me. Fantastic theme that ties everything together, a myriad of possible engine-building combinations given the 100s of unique cards, and excellent player interaction. Four-player game with all new players took maybe 2.5 hours, although it felt like the meat of a 4+ hour game.” – Calbond (rated 9/10)

Our goal is to let people enjoy our creative work. Seeing this happen brings great joy. And a bit of envy, because we have not ourselves received the final product from the factory yet. You who now own the game, you own it before the designers! In fact, we’ll not receive it for about 2 more weeks. So please, show us more!

We’re working hard on the preparations for the world’s largest board game fair, the International Spieletage in Essen in October. This will be the highlight of the year for us, because we’ll be there, selling Terraforming Mars, along with all our co-publishing partners, to the European Market. See you there!