Throughout the development of Space Station, some questions are frequently asked. The most usual questions will be answered here;

Can I flip back my Enhanced Core Module?
– No. There is no action that allows that.

Can you build a module where a free exit is located towards another module?
– No. Modules may not overlap. If the table is getting crowded, you may move your station and overlap your modules a little to be able to fit everything on the table, but modules will sometimes be in a position where they do block other modules’ exits.

Can I use Robotic Arm to just move a module back and forth to stall the game or force a tie?
– You can move it back and forth, but if all other players pass and you continue this silly business, they can exclude you from the game and get on with it without you.

Do I play an event when I fetch it with Observatory?
– No. You only fetch it to your hand. Next turn you may play it normally, or save it for later.

Do I get discount from Extra Docking Port when I build new modules using Command Center or Military Command?
– No. Those are crew actions with a fixed cost; they are not build actions.

Do multiple Extra Docking Ports and Airlocks stack i.e. do they increase the effect?
– Yes, it gets even cheaper to build/repair with several of these modules.

Do you get double effect from your modules if you play Efficiency?
– No. Efficiency only allows you to use each module with a crew action an extra time on separate turns. You do the action again, pay the normal cost again and get the normal benefit again.

Does the Shipyard give 2 VP the last year?
– No. Only the awarding for the module types at the end of the year is affected by the 2 VP rule.

Optional rules:
Space Station has the following optional rules available. It is only recommended for players familiar with the game and we recommend only using one optional rule at a time.

Optional rule: Enhanced Start (described in the rules)
When drawing cards for the first year, every player draws 10 cards and chooses 5 cards to discard, so that each player starts the game with 5 cards.
This gives the players a better and more interesting starting hand.

Optional rule: Market
Right before each year starts, 5 cards are revealed from the deck and placed face up in a row out from the deck. This is the market, from which players may buy cards. This introduces a new type of action: the market action, which allows you to buy a card to your hand. The card furthest from the deck always costs 1 MC, the next card costs 2 MC and so on up  to 5 MC for the card next to the deck. If a player buys the outermost card for 1 MC, a new card will be outermost and cost 1 MC. The other cards will also become cheaper. At the end of the year, all remaining cards in the market are discarded.
This gives the players access to more cards and combos during the game. 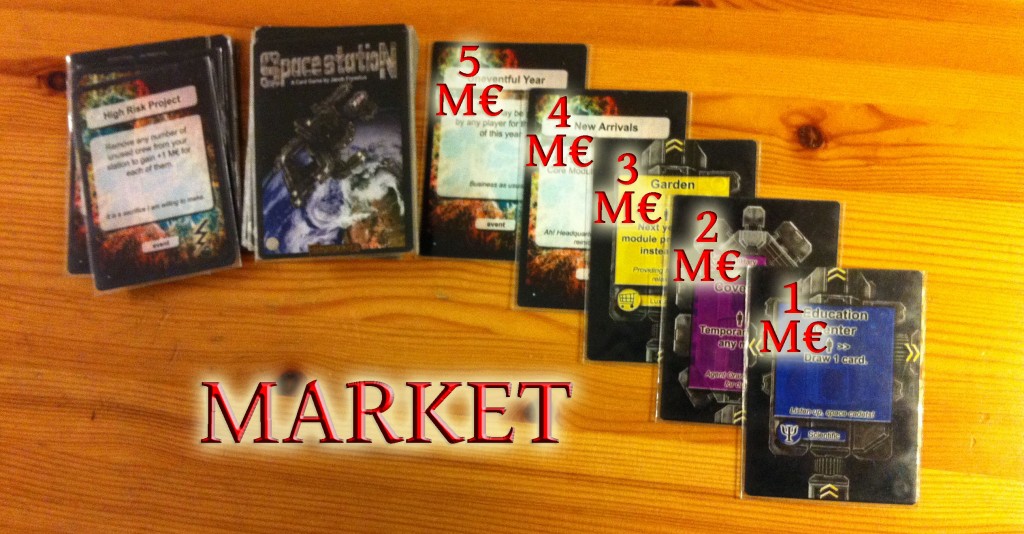