Last week, we released a sample of the new graphics for Terraforming Mars. For those of you who are unaware of what Terraforming Mars is, we thought we would give you a small introduction to the theme, and to the anatomy of a card.

Terraforming Mars is a resource management game where several giant corporations (players) compete for Victory Points by making Mars habitable. It is a crossover between science and science fiction, where all aspects are inspired by actual projects discussed by NASA, ESA, Mars Society, Mars One, and science fiction authors. At the start of the game, Mars is a cold, dry planet with minimal atmosphere. This is about to change, as the players introduce plant life (photosynthesis, increasing the oxygen levels), crash comets on the the martian surface (generating lots of heat and accumulating water), as well as numerous other more or less crazy projects to make Earth… eh… I mean Mars, a better place.

To introduce changes,  players play cards (projects). The game comes with approximately 200 unique project cards, each with their own project for making Mars habitable. Here is one example: 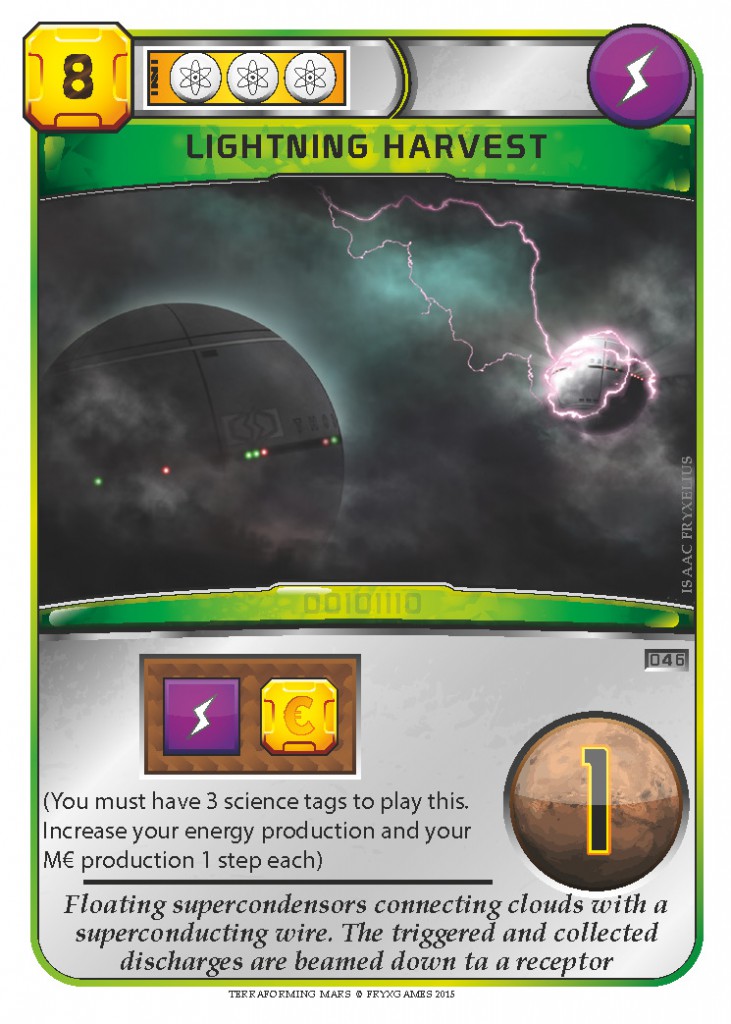 Lightning Harvest – By sending floating supercondensers connected by wires up into the clouds, electrical discharges can be collected and utilized for energy production. This enhances your energy infrastructure, as indicated by the purple power tag (top right).

In order to research this project, you must first pay 3 MC to buy the card into your hand (this is the same for all cards). Then you need to acquire at least 3 science projects before you can play  Lightning Harvest (3 white science tags in the yellow requirement box). When you play it by paying 8 MC, you increase your production of energy and MCs by 1 step each. This will give you 1 additional energy and MC at the end of each turn for the remainder of the game! If the symbols had not been on the brown production box, you’d have recieved a one-time bonus only. Because Lightning Harvest is an environmentally friendly technology, it is also worth 1 VP at the end of the game, as indicated by the Mars globe (bottom right).

Each card in Terraforming Mars has helpful text in paranthesis explaining how the card works. Each card also has a flavor text, giving you a clue to what this project is about. There is also a stamped card number, but who cares?

Because the card has a green banner, it stays on table after being played (it is still running) and its tags can be used in combination with certain other cards.

We continue to work on the graphics for Terraforming Mars. Our brother Isaac has come up with a new layout for the cards, and we just can’t keep it to ourselves. Here is a sample, Interstellar Colony Ship. 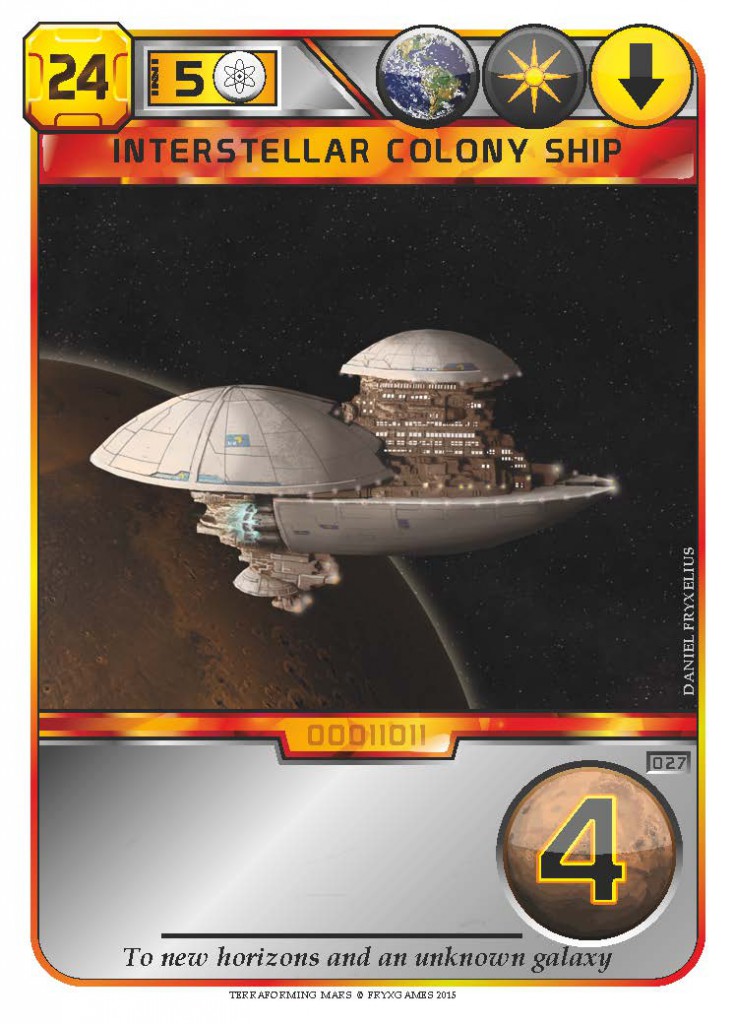 Does it look familiar? Long before the Pleiades were colonized, standard colony ships were exploring the systems closer to Earth. These ships were manufactured about the same time as Mars was terraformed. At this point they were merely colonization vessels. Later, some of them were converted into warships (of course, you need to buy our game Fleets and open it to know what we mean 🙂 ). Have a great week!

For the first time we have a world-wide beta-testing project. A dozen play-testing groups are currently helping us develop Terraforming Mars, which we hope to release next year. It is exciting to hear the opinions and suggestions that the groups give us. At the same time, the graphics of the game are improving as our brother Isaac sets his mind to it. The new look of the cards will be brighter, cleaner and awesome:er!

Putting the play-testing to the quantative level brings out lots of special cases which we have never encountered before. This is an example, 5 cities around a commercial district is a view not usually seen. 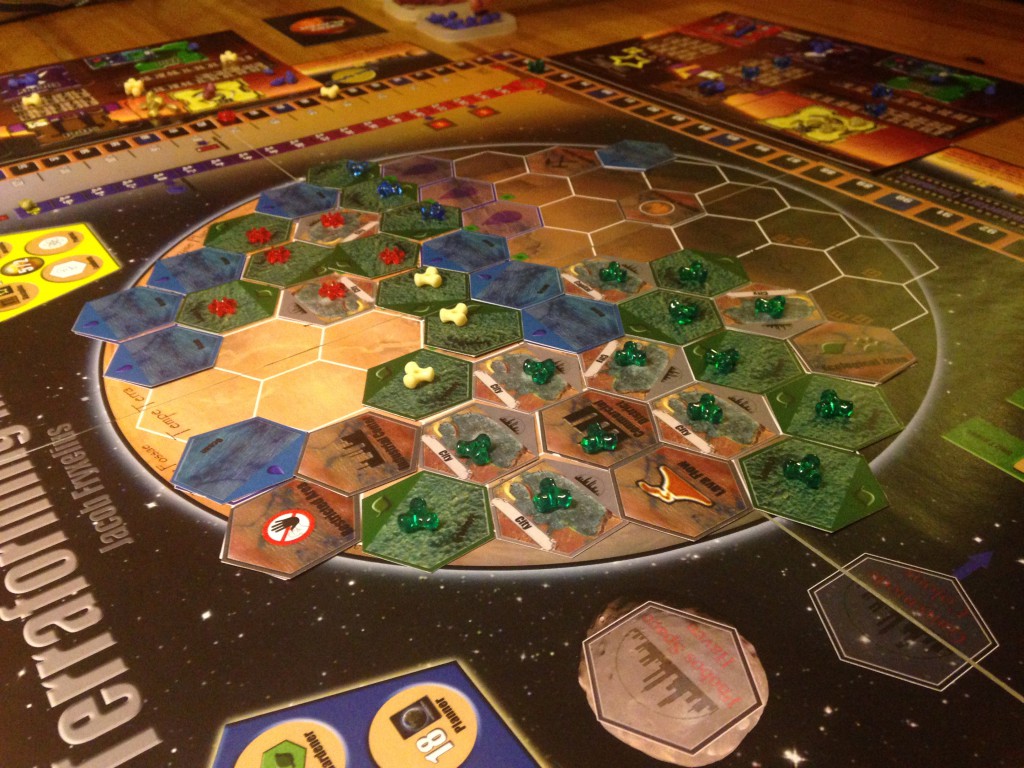 We are all back in Sweden after an amazing week in Germany. The Essen Spiel fair met all our expectations and has given us new motivation for continuing the development of our games, both old and new. For those of you who were unable to visit the fair, here is a short summary:

Since all four of us brothers in the company live in different cities in Sweden, meeting up for a long one-week trip to Essen is one of the absolute highlights of our year. For the third year in a row, our brother Thomas joined us, so there were five of us. On the ferry over to Germany, we got a chance to try each others’ new prototype games and discuss future development. 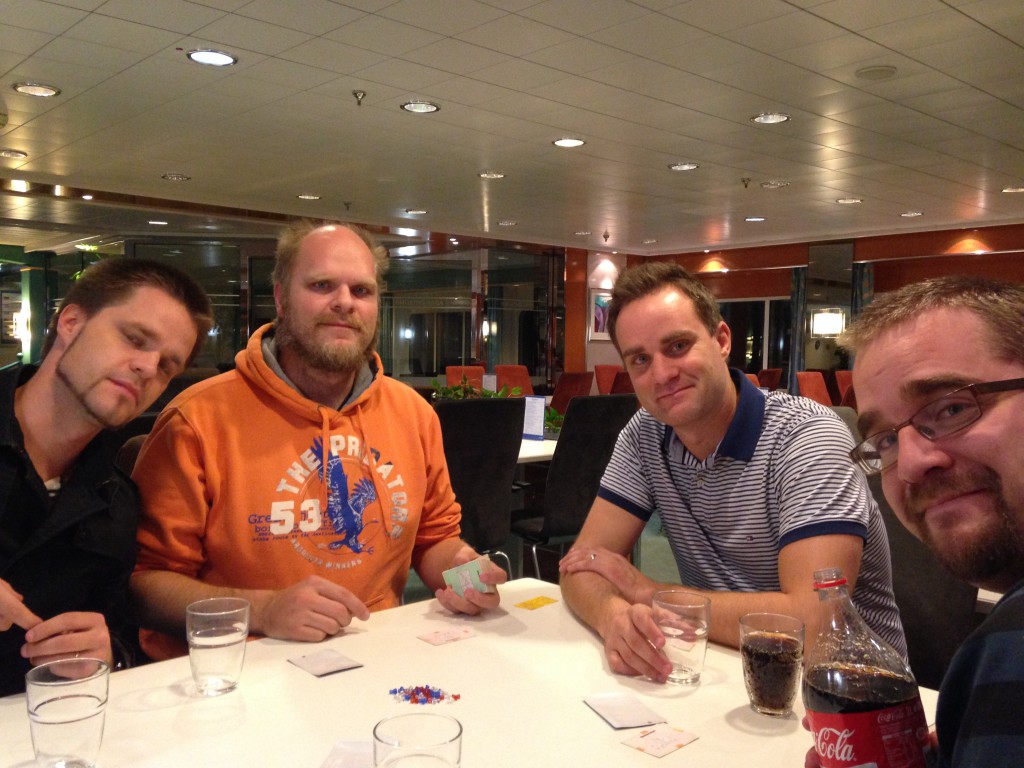 On Wednesday, we finally received the printed copies of our new game Fleets – The Pleiad Conflict, this year’s novelty. It was actually finished from the factory on Monday, and was thus one of the newest games at the fair. 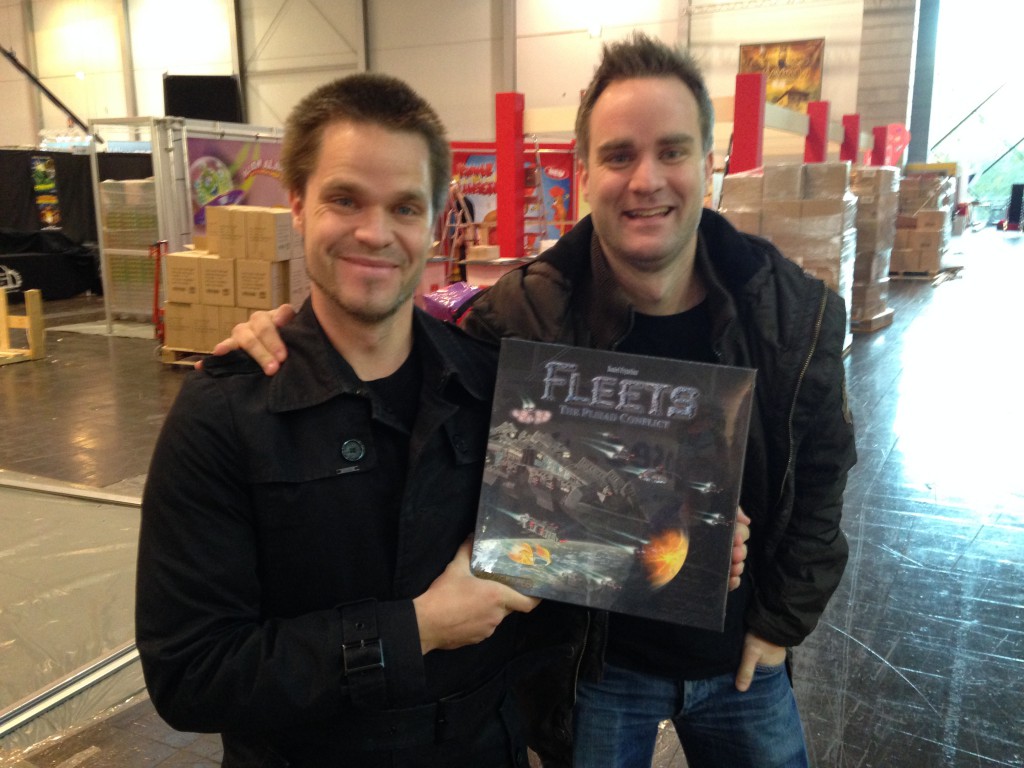 On Thursday, the fair opened for visitors and our booth filled up quickly to stay filled for the rest of the fair. There was always something going on, from game demonstrations to our major events, to business meetings. Speaking of events, just as in previous years, we got a winner in our contest. Here he is, the winner of the Fleets final on Saturday: 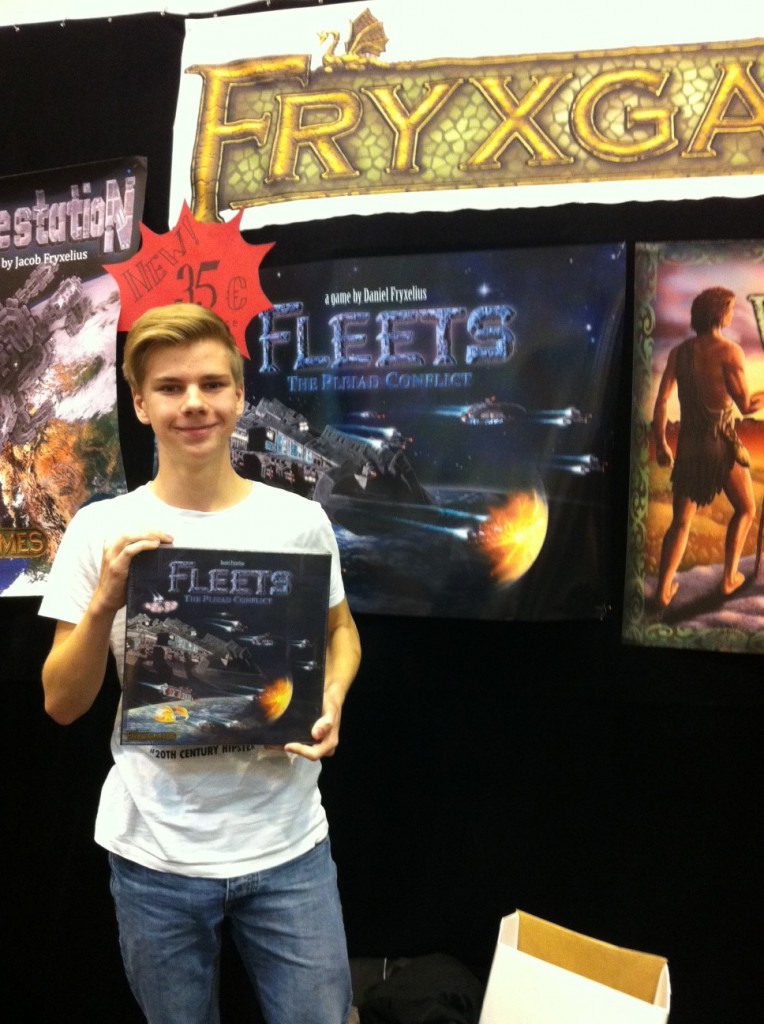 The other event was an announcement: Our next game will be Terraforming Mars, a resource management game about making Mars habitable for mankind. We will soon release more information about this grand project. An interesting part of our event was to release 10 prototypes of the game to official beta-tester groups chosen among the visitors at the event. Now the game is being play-tested in several countries all over the world to help us reach board game perfection for our planned release next year. 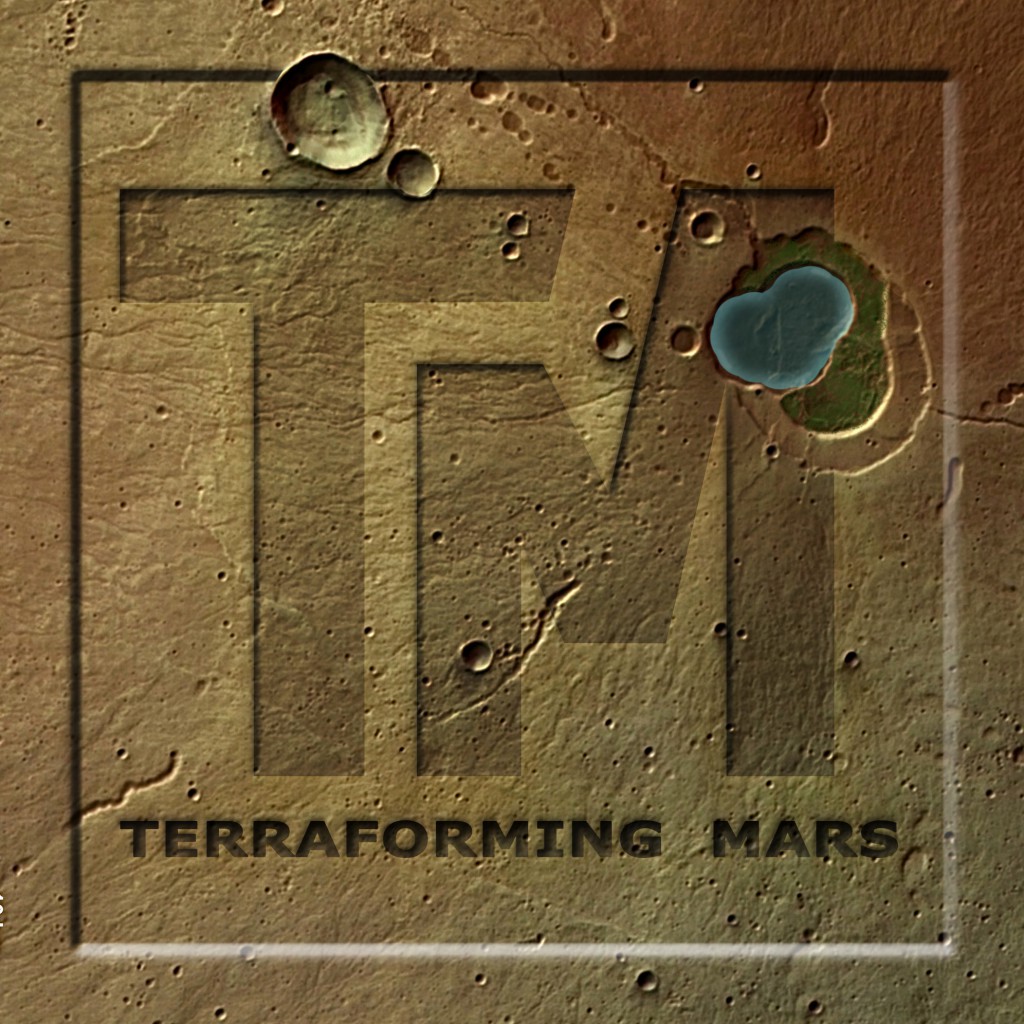 All in all, Essen has been a splendid fair for FryxGames, and we would like to thank all of you who visited us during the fair, giving us great encouragement and inspiration. Thanks also to our wonderful families who have been supporting us all year long.