For a long time, we’ve been negotiating a decent shipping contract for the US. Well, we’re still negotiating, but we’ve got so many requests from US customers that we felt compelled to offer shipping at the prices we do have. We’ll try this out for a week or two, and if it works well, we will also add more countries.

The weight of each item can be seen under the “Additional Information” tab on the respective product page.

Hopefully, these prices will become better soon and hopefully, we’ll have prices for heavier packages. But for now, we just wanted to say: welcome to our web shop, dear Americans!

Isaac just finished the official youtube tutorial for Turmoil. This is probably the easiest way to learn the rules of our newest expansion. Enjoy!

The new sleeve set for Terraforming Mars is now in stock at our webshop. There are 4 types of sleeves, one for each type of card in Terraforming Mars: Project cards, corporation cards, prelude cards, and the new Global Event cards that comes with Turmoil (which is expected to be in stock in late October).

You can buy the sleeve packs separately or as a full set, containing 11 packs to cover all cards even if you own all expansions.

Last week, Jonathan and Isaac visited LudoFact – the factory in Germany which manufactures most of our TM copies. We managed to get hold of a few newly-assembled copies of Turmoil. While there are many thousand copies left to assemble, this still tells us that end is near, and Turmoil is coming. The factory floor was loaded with Terraforming Mars components, both for the base game and Turmoil.

As soon as we got home to Sweden again, we just had to play a game of Terraforming Mars with EVERYTHING! Venus, Prelude, Colonies, Turmoil, the new Player Boards, the new Promo Pack, and the new sleeves. It was majestic, and we long to bring this experience to all of you.

Hi friends! We’ve finally published our preorder tool for Essen, where you can make sure you will get what you want at our booth. Please visit the preorder page here.

As all our newsletter subscribers already know, the next special item for Terraforming Mars is special designed sleeves to help you protect your cards while also making them gorgeous. They will be available in our webshop soon, as well as in Essen.

The Reds is a political party and a social movement worried about the reckless terraforming taking place before their eyes. They are the true environmentalists, and they want to keep the red planet red, if possible. They obviously don’t have much going for them in this game, but once in a while, they convince the Terraforming Committee to put the brakes on at least.

In the game, this is reflected in their ruling bonus, giving a TR to the corporations that has done the least to destroy the planet, and the ruling policy that taxes each terraforming with 3 MC.

These policies are of course very annoying for the corporations, but some have learned to live with them and profit from them. Pristar, short for ‘pristine star,’ also has a vision of keeping Mars largely red. Terraformed, yes, but with large parts in more or less pristine conditions for tourists and future generations to enjoy.

Yes, Pristar is a tourist-oriented corporation, methodically preserving parts of Mars and making money off it. For this, they can expect to be rewarded by the Reds whenever they have any say in the Terraforming Committee. The Reds will probably need a little help in order to make themselves heard in the Committee, but since they help the corporation often seen as weakest, not many will try to counteract them, especially if they’ve gotten some public support as well due to some global event.

Because of their aversion to the terraforming that the corporations are doing on Mars, the Reds are very skeptical of the corporations as a whole. This makes them the unofficial anti-corporation party, gaining support from dissidents as well as environmentalists and idealists. Or rebels, moralists, and backwards people, depending on how you see it.

But how can Pristar win when terraforming is such a big part of the game? You might ask. Terraforming will not mix with their ability, true, but many types of terraforming can be saved up. You don’t need to convert heat into a temperature raise this generation – do it later when you have more terraforming to do anyway. Same goes for plants and terraforming events. You can save up a few generations while you do your thing as Pristar, and then BAM! Convert heat 3 times, play Big asteroid and Towing a Comet, and finish off with a greenery conversion. And a Bribed Committee. Next generation you go back to being very conservative again.

The corporations who wish to apply biological means for terraforming are not alone either. The Greens party in the Terraforming Committee has the exact same focus and will do anything to make Mars green as soon as possible. If allowed to dominate the Committee, the Greens may even grant you a GMO Contract, compensating every biological project you launch!

The power struggle in the Terraforming Committee is sure to give the Greens some competition, not the least from the Reds, the true environmentalist party that wants to preserve Mars as the red planet. The Greens can gain strength from public support though, if the tides of time turn in their favor, such as a bioengineering boom where bio technology rapidly develops and new possibilities open up. Even so, there can be backlashes. Experimental lifeforms sponsored by the Greens may seem like a good idea, but may ultimately cause people to develop a disgust towards reckless terraforming.

The corporations are not alone on Mars. There are politicians, populations, and independent factions to take into account as well. And a big red planet that will not always cooperate.

Welcome to the turmoil of the human colonization of the solar system!

We are thrilled to announce that Terraforming Mars just increased its worldwide ranking on BGG, and it is now the world’s 3rd best board game! The ranking is based on the average rating among voters (8.4/10) and the sheer number of votes, in this case over 40 000! The 2 games that are ranked higher are Gloomhaven and Pandemic Legacy: Season 1, both of which are legacy games, a very special kind of game in which the game rules – and often components – change between each play. Terraforming Mars is thus the highest ranked non-legacy game in the world! 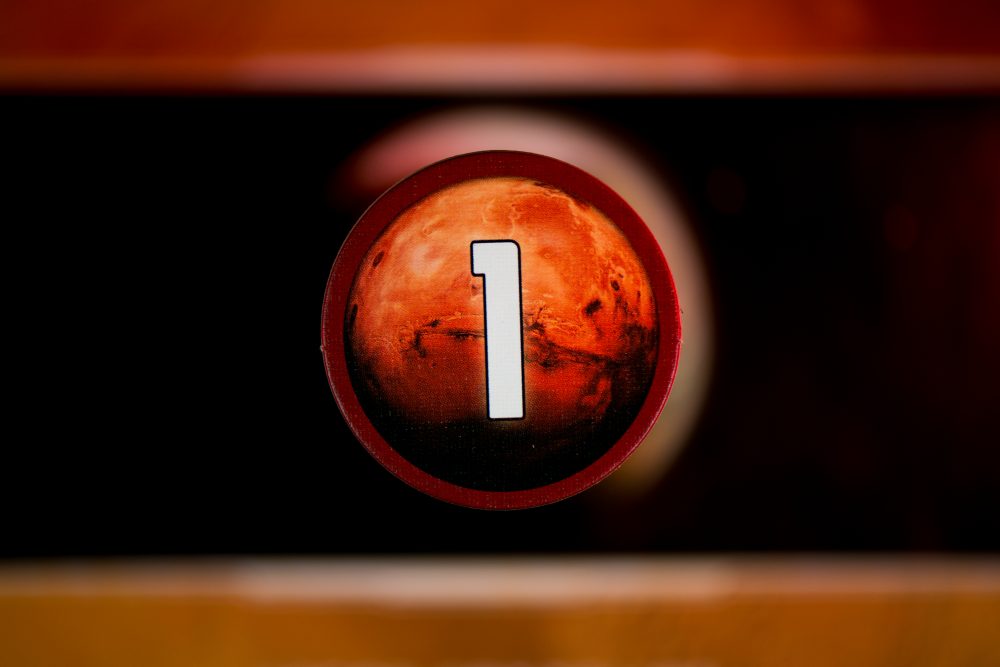 How will we celebrate this? By creating more merchandise and expanding our webshop! We have started the production of the next special item for all TM lovers. We’ll have more news about this within a few weeks. Have a great weekend, and as someone on Mars said: “There’s no place like dome”.

Time flies, and we’re deep into the process of getting the production of Turmoil started. This includes coordinating the translation of the expansion into more than 15 languages, setting color profiles for the printer, double-checking grammar, iconography etc. Since Turmoil is our first Kickstarted expansion, we also have a lot of new tasks to handle, from sorting out who will send which package to which backer to preparing packaging materials, labels, tape, markers etc. For me, it means I will prepare my home to have 19 fully loaded pallets of games and packing material delivered to my front door in Karlstad, and try to fit them in whatever room possible, even in the bathroom if necessary (no worries, I have 2). From there (my home, not my bathroom), over 4000 packages will be sent to backers in Scandinavia and many other European countries. I am so pumped for this, and really look forward to hearing all your feedback on Turmoil, which has been my favorite expansion since the release of the base game in 2016. Since then, we’ve maintained and enriched the theme of the expansion, but have reworked the mechanics to make a worthy follow-up to Colonies. I recently searched my computer folders for old prototype versions of Turmoil, and came up with a few cards I would like to share. This is the oldest one I found, a global event from long before the release of the base game. These cards were shuffled into to project card deck (the project cards also had this design back then. Good thing Isaac came along to make something better!) 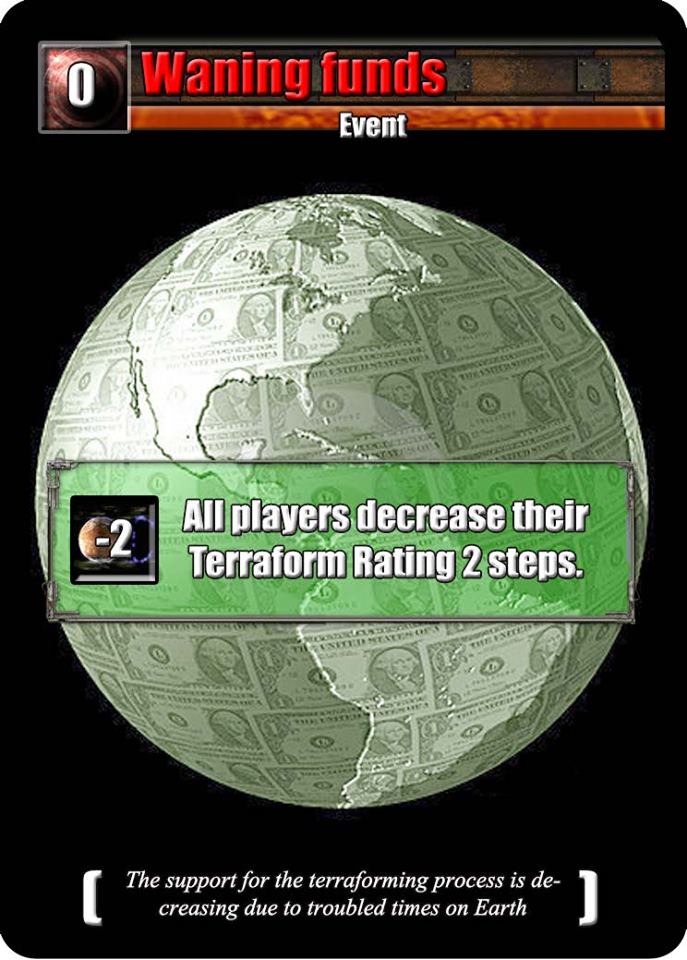 Some time after the release of the base game, we had time to come back to the development of Turmoil, and Jacob had the idea to have one event lead to another event a few generations later. We referred to the events as “sow” events and “reap” events. The essential ideas from the above card were carried over to the new system. In the following example, which made it all the way to the final version, Separatist Movements start gathering support, which leads to War on Earth 3 generations later. 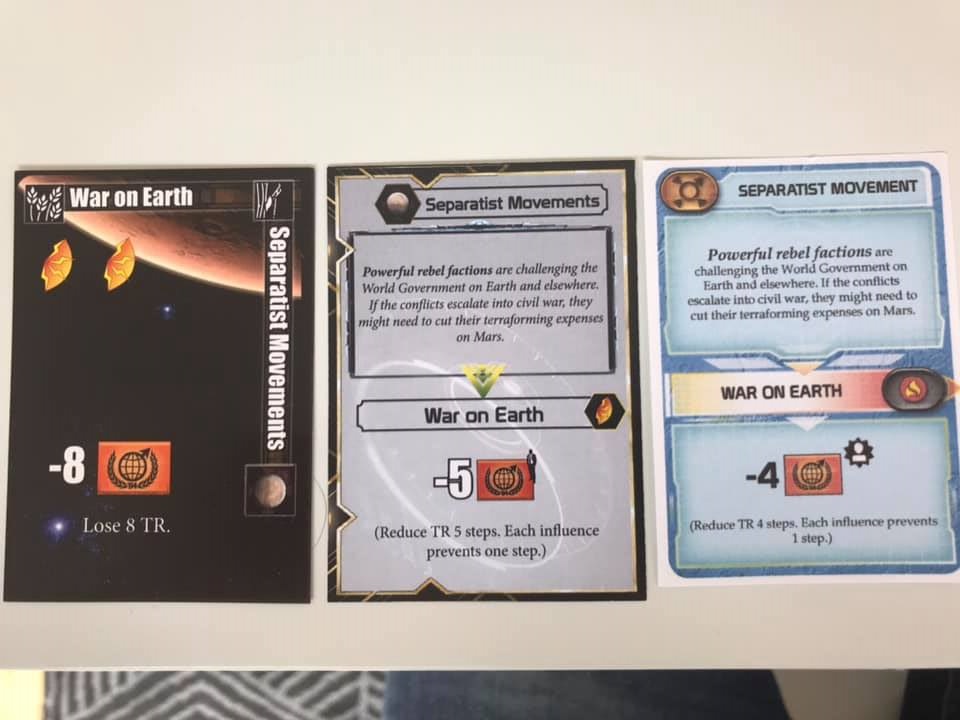 A war on Earth would drastically change the amount of funds available for the terraforming efforts (“Waning funds”), which reduces the Terraform Rating for all players equally. As you can see, in the first version, all players lost 8 TR, without any possibility to protect themselves. Back then, the political system was completely different and players didn’t have “influence”. The theme was there, and it was great. But the mechanics were not interesting enough, and too harsh. The real break-through for Turmoil came after some heated discussions about the expansion in 2018. That’s when the game mechanics started falling into place. The middle card above was the last prototype before the final version. By then, we had added delegates, ruling policies, the chairman, and some cards to interact with those. Suddenly, Turmoil was much more dynamic, allowing for a range of new tactical moves, long-term planning, player interaction, and an ever-present narrative of the growing human civilization on Mars.

In other news, we just received a batch of extra cube sets for Terraforming Mars, and we have started to offer them in our webshop. It is the same set that comes in the game, so just over 400 cubes. If your cubes are worn out, or if you want extras, you can order them here. 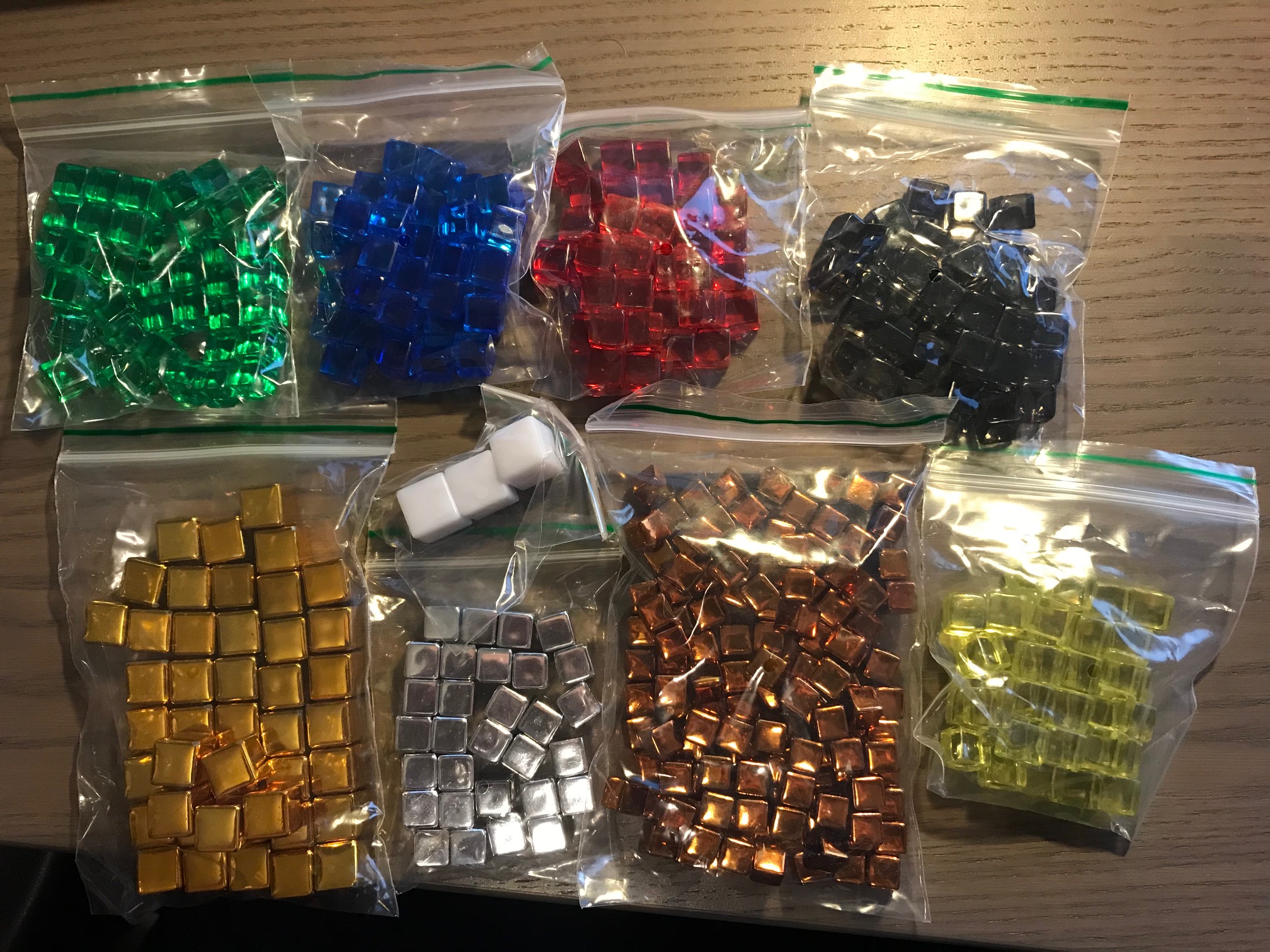 If you haven’t seen the Terraforming Mugs there already, go check them out as well here.

Things are happening fast right now, so we have 2 great news for you. The first one is that the Kickstarter campaign for our 5th expansion for Terraforming Mars: Turmoil, is soon finished. It has collected over 1,000,000 USD in funds from over 20,000 backers from all over the world! With approximately 40 hours left, this is your last chance to support the campaign and be one of the first to receive the new expansion with the bonus dual layer player boards and the new massive promo pack. Visit the Kickstarter Campaign here: https://www.kickstarter.com/projects/strongholdgames/terraforming-mars-turmoil 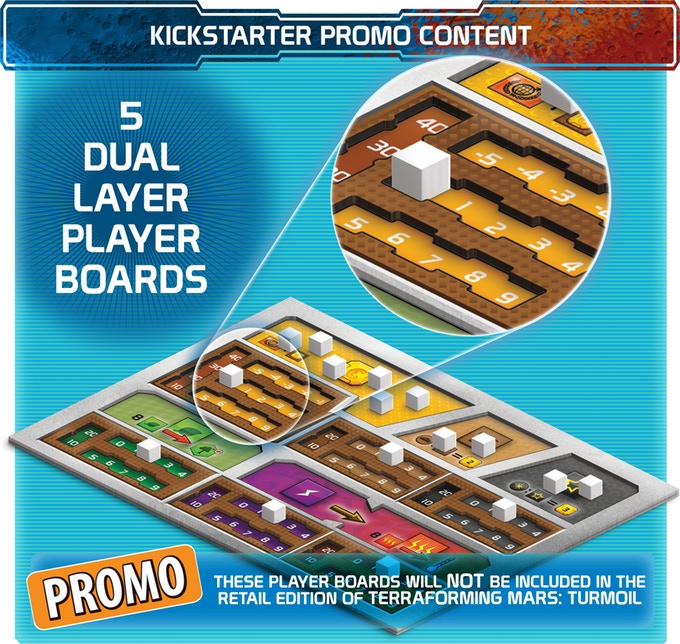 The second thing is that one of our oldest games, Space Station, will get a face lift and be published as a new edition by Hexy Studio. 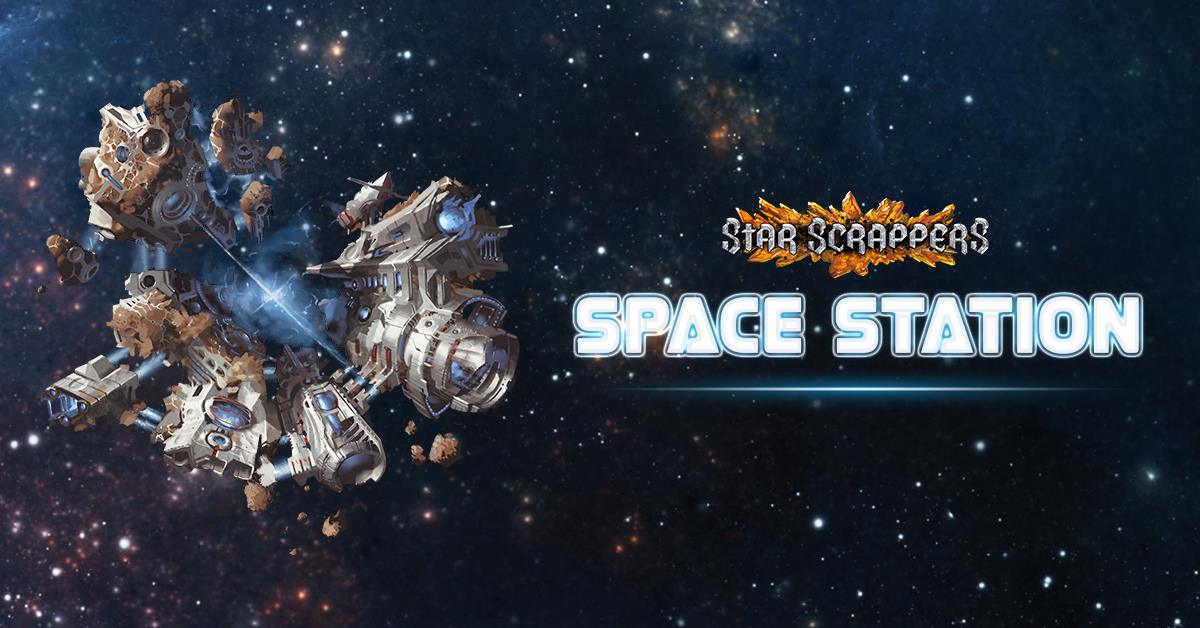 We have streamlined the game mechanics, and Hexy Studio will make the new graphics so that the game fits their Star Scrappers universe. We think that this collaboration will be a great benefit for the game, and hope you’ll enjoy it a lot!

The long wait is finally over! We now have the promo pack back in stock for our Swedish customers. The promo pack consists of 4 project cards and 3 corporation cards.

Welcome to our Webshop!

Shipping for up to 2kg packages is now available for US customers. We're working on getting a shipping contract for all package sizes. The Dual Layer Player Boards are out of stock. We're printing more, but they will not be in stock until February/March. Dismiss